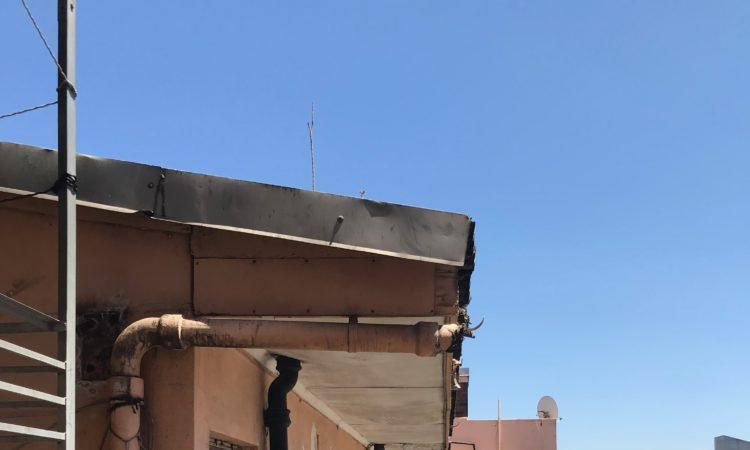 Before and after photos of Ana Capri, in Durban, where the transformation was aggressively driven by ZDFin founder Michael Schaefer and a team that included engineer Philip Nell.

One of the most remarkable recent inner city renovation projects undertaken in Durban was the transformation of Ana Capri, a block of 56 apartments in Albert Park with splendid views of the harbour.

A small team led by Michael Schaefer, now ZDFin managing director, did what many would consider well-nigh unbelievable.

They reclaimed an 11-story building invaded by drug lords and squatters, taking a building that was a blight on the landscape (at the freeway entrance to the city) gutting and refurbishing it in six months.

Ana Capri is a 1960s apartment block at the south end of Diakonia Avenue, overlooking the green lung of Albert Park.

A brief history: In 2004 Michael’s father Neville Schaefer, a property visionary in South Africa, got involved in Ana Capri because of his interest in viable accommodation for working-class inner-city tenants.

But soon afterwards, Ana Capri’s body corporate got badly into the red because of levy arrears.

Dysfunctional sectional title bodies corporate are a major contributor to inner-city decay and one route to rehabilitation requires placing the body corporate under administration and working with owners on a plan to return things to normality.

It rests on financial management training and agreements with municipalities and banks to recover arrears.

Ana Capri degenerated into a pit of unrivalled squalor. The building was hijacked by a Bonnie and Clyde couple who took over apartments until the block was filled with their illegal tenants paying rent to them.

Over a decade of legal wrangling to evict illegal tenants ensued.

Eventually the task to save Ana Capri fell on the shoulders of Michael Schaefer. He enlisted the services of engineers and Andre Grundler, a building rehabilitation expert.

At the height of the crisis, Ana Capri’s body corporate owed R9 million to its managing agents that it had borrowed as working capital to help run the building and conduct essential maintenance.

About 50% of that debt was legal fees owed to lawyers tasked with recovering levy arrears. The balance was for electricity and water.

Michael Schaefer says saving the building was hamstrung by the slow and cumbersome legal system, while compliant owners subsidized non-paying owners, until they couldn’t do so anymore.

The city turned off the water and electricity supply and the lift shaft was filled with garbage up to the 8th floor. Sewage ran down the corridors.

Repeated attempts to clear the building failed. The sheriff of the court wouldn’t serve eviction notices because he feared for his safety.

R1 million in legal fees later and Schaefer was able to wrest control.

He bought the flats out from investors no longer interested in the building and got the balance on auction from the body corporate in lieu of debt.

Stuck with a derelict building where he had to create value, he spent R12 million renovating the building, but only after contracting a security company that stood guard while he and his team worked.

Engineer Charles van Herzeele started gutting the building from inside. He enlisted the help of Philip Nell, from Naba Consulting and they carefully scoped the refurbishment, taking it from a shell of a building to spanking new.  They installed a new roof, a new lift and refitted each flat.

The building is now fully let with tenants paying between R3950 and R4250 a month for flats of between 42-45m2. The road level flats were converted to a superette, laundromat and hairdressing salon.

The building has biometric access control and 24 CCTV cameras.

Nell says Ana Capri is an example of a building that was professionally scoped and properly overhauled. There is no point in being penny-wise and pound-foolish in repairs. Everything from roofing to plumbing to spalling needs to be correctly assessed, specified and quantified in detail to ensure that the project is successful.

“Critical issues are the result of a lack of maintenance or patchy maintenance, often in big blocks in high, inaccessible places. There is a degradation curve in any structure. If you leave repairs too long it becomes impossible to reinstate.”

At Ana Capri, Nell says Schaefer and his team were determined to do it right. They were applauded by the eThekwini municipality for a success story that might help turnaround other bad buildings.

Schaefer said 5 key lessons from the Ana Capri story were: